There is a great potential to understand and leverage the interaction between cities, farms, and resilience, as India is poised to effectively implement National Disaster Management Plan (NDMP) that draws from Global Sendai Framework. AIDMI is enlisting areas so far not addressed in the implementation of NDMP. 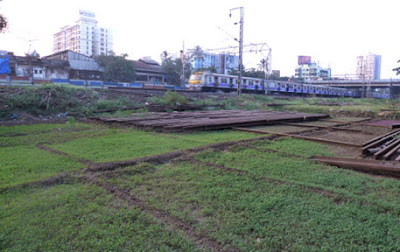 The rapid and often unplanned expansion of cities is exposing more people and economic assets to the risk of disasters and the adverse impacts of climate change. Urban flooding is one such major risk. Due to land-use changes, flooding in urban areas can happen very rapidly with sudden flow. It may result in temporary relocation of people, dispersal of animals, damage to civic amenities, deterioration of water quality and risk of epidemics.

India experiences periodic droughts and these drought-prone areas need long-term water resource management strategies coupled with better management of dryland farming to effectively cope with recurring droughts. Investing in disaster risk reduction for resilience through structural, non-structural and financial measures, as well as comprehensive capacity development is one of the priorities for action under the Sendai Framework. Along with the mandate given in the DM Act 2005 and the NPDM 2009, the NDMP 2016 has incorporated the national commitment towards the Sendai Framework to increase resilience and prevent the emergence of new disaster risks and reduce the existing risks.

However, the interaction of these two forces leads to a greater loss and damage possibility as well as preparedness opportunities. The opportunity is especially timely as urban farming has found support in Indian cities. Urban farming is farming of fruits, vegetables and spices growing in urban areas for urban and non-urban consumption. Growing green herbs in urban parks or growing watermelon on heated roofs covered with sand bed are same initiatives actively pursued.

Several private sectors operators - Khetify and i-kheti in Mumbai and Living Greens in Bengaluru grow vegetables in farm. Some faster growth area with endless possibilities is citizens growing vegetables and spices on their balconies and terrace and even on their walls. In Ahmedabad, with the help of Mahila Housing Trust, poor and homeless women workers living in slums have used seeds to grow willer of Karela, Tindi and often vegetables to grow food and keep roof top cooler from heat wave. In Mumbai, there is a limitation for agriculture because of scarcity of the land in the city. Despite this, there are people who've started growing vegetables around railway tracks and the surrounding free areas of railway stations among other open spaces. The local people, vegetable vendors grow many vegetables in such free space.

Bengaluru Garden city Farmers Trust, the group of intellectuals, encourage citizens to take up organic terrace farming. The Trust is managed by a group of nine people. Nearly 10,000 people have already turned farmers in Bengaluru city. It hopes to bring back the green standards that the city was known for before the IT sector revolution.   They have been motivating citizens to convert all available spaces in and around their dwellings into green, edible patches. The effort is slowly snow-balling, with many such groups greening vacant plots in the city.

A majority of the successful urban farmers advocate that urban farming should remain at small scale only so that market considerations do not over-ride the environmental benefits. e.g. biodiversity in vegetables and fruits. Such initiative helps to make cities more resilient to fight against climate change.

Southasiadisasters.net issue no. 167, April 2018:
This issue of Southasiadisasters.net is titled"Chhattisgarh Reduces Risks and Builds Resilience". It highlights the key lessons and experiences of various stakeholders (both government and non-government) in taking concerted actions to build the resilience of Chhattisgarh against the aforementioned risks.
Chhattisgarh has been identified as one of the richest biodiversity habitats in India and has one of the most dense forest covers in the country. It is also the 10th largest state in terms of geographical area, the third largest in terms of forest area and has the second largest mineral reserves. These advantages has boosted the rapid growth and urbanization to holds the top rank in terms of development expenditure to GSDP ratio. 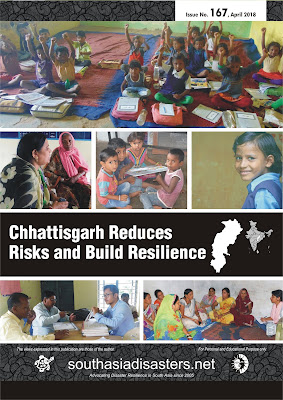