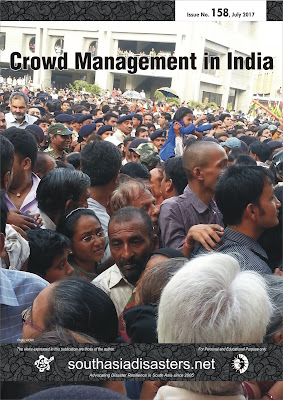 India is no stranger to large gatherings or crowds. Crowded railway stations, market squares and temple complexes are all commonplace. Given the ubiquity of crowded places, Indians tend to have a high tolerance for them. Thus, it is important to understand how crowds operate.
As soon as the word "crowd" is heard, the first instinct is to "manage" them, if not control them. Given the unusual number of stampedes taking place at religious congregations in the country it is important to manage these crowds both efficiently and creatively. Through the work of All India Disaster Mitigation Institute (AIDMI) in India across nine states, sixty nine districts and over thirty five cities it has been found that all crowds do not need to be managed or controlled; that all crowds are not unruly or out of control; that in fact crowds offer energy and numbers to move towards something creative and constructive in society from time-to-time.
In AIDMI's resilience building work in four most important temples of Gujarat - Somnath, Dwarka, Pavagadh, and Dakor - it was clear that crowds that gather around and in the temples on daily as well as occasional basis do pose a risk and can cause a major disaster like a stampede. But it was also evident that crowds have their own ways of working out cautious movements, harmonising pace, re-orienting direction, and avoiding injuries. But this informal, self-organising, local ways of crowds are hardly studied, which is why they've never been used to enable crowds to self-manage. In fact there are hardly any crowd studies available in India though crowds are everywhere. What AIDMI has found in its work with these temples is that crowds can act and commit to be and remain safe, can re-organise and re-orient, can balance between internal and external processes that lend to risk, and evolve a coherence to its members for a given time and place. This is not on effort to romanticise crowds, but to leverage the inherent creativity and capability of a crowd for the common good.
Rahul Mehrotra, India's leading architect, has re-introduced Kumbh Mela, world's largest gathering to us. Kumbh Mela is self organising, seamless, cost effective, safe, and a bliss to all who attend this world's largest crowd. In fact he argues that such traditional gatherings offer us a new and more rooted way of planning cities and settlements in India.
At a presentation of his book on Kumbh Mela at L.D. Institute of Indology in Ahmedabad what became clear to me was the need to change the design and delivery of the environment within which crowds gather and operate. That is, changes in the ability of decision makers to understand crowds; changes in coordination and collaboration as well as the mobilisation of crowd management; and change in institutions and institutional capacities to respond to the needs and energies of crowds.
So if we were to launch crowd studies in India what will be its top four research priorities? First, start with the history of crowds that gather at say the Jagannath temple in Bhubaneswar or the Jama Masjid on Eid in Delhi. Second, find out where can crowd studies be placed among academic disciplines – in city planning, emergency management, security, and more. Third, look at crowds as people, individuals with will and concern both. Fourth, design and develop programmes and events that help us better understand the inherent good of crowds.
These first steps can go a long way in ensuring that our country does not have to suffer tragedies like stampedes in the future. Crowds do not remain a problem but become a solution.
– Mihir R. Bhatt