Reducing disaster risks in Nepal is important to India. And building resilience in India is important to Nepal. When India and Nepal reduce risks the region is safer.
– Mihir R. Bhatt 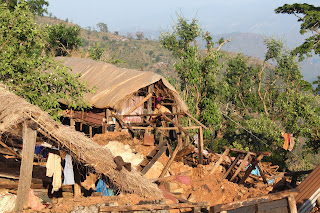 The Himalayan nation of Nepal is famous for its scenic beauty, adventure sports and friendly people. However, it is also exposed to multiple hazards like earthquakes, floods, landslides, fires, heat waves, cold waves, lightning, windstorms, hailstorms, droughts, epidemics and so on due to its variable geo-climatic conditions, young geology, unplanned settlements, deforestation, environmental degradation and increasing population. The 2015 Nep
al Earthquake which claimed over 10,000 lives and caused economic damages amounting to US $ 7 Billion is a testament to the country's enhanced vulnerability to disaster risk.

As a nation that is frequently ravaged by disasters, governance of disasters in Nepal was primarily fell under the ambit of the National Calamity Relief Act of 1982. However, it did not cover the broader spectrum of hazard mitigation and disaster risk management or the categorization of the diversified disasters which the country is exposed to. Therefore, there was an urgent need for a new legal framework that would holistically address disaster risk in Nepal.

The endorsement of the Disaster Risk Reduction and Management (DRRM) bill by Nepal's parliament addresses this need. The DRRM bill represents the culmination of a decade's worth of efforts by various development and humanitarian actors. This piece of legislation will institutionalize disaster risk reduction as well as mobilise local resources.

This bill also proposes setting up a Disaster Risk Reduction and Management Council, which will have ministers for finance; supplies; agriculture; home affairs; physical infrastructure and transport; women, children and social welfare; defence; forest and soil conservation; education; urban development; irrigation; information and communications; and federal affairs and local development as the members.

It is worth noting that the DRRM bill can be leveraged to broaden the scope of DRR activities in the country. For instance, the theme of school safety and protection of children affected by disasters can be more easily planned and executed. Other allied themes such a nutrition, human mobility (both social and physical) as well as biodiversity protection can also be addressed through the medium of this bill. "Gender" is the key and essential factor of disaster risk reduction. It can also be included as DRR activities in the DRRM bill.

The devastation wreaked by the 2015 Nepal Earthquake, stirred an entire country into concerted action for disaster resilience. Since then, Nepal has been making a steady recovery which is observed in an overall improvement of various human development outcomes. The DRRM bill is another expression of the changing landscape of risk reduction in the serene Himalayan nation.