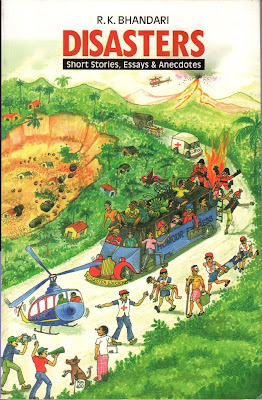 Disasters are often viewed as abrupt cataclysmic events that cause widespread death and destruction. However, it should always be borne in mind that disasters are complex phenomena that culminate due to a variety of underlying factors. Reducing them to isolated and abrupt events dilutes the narrative surrounding disasters, which in turn limits our understanding of them. Thus, it is important to focus on the narrative surrounding disasters by telling or retelling their stories.

Hardly any telling or retelling of stories of disasters is taking place in spite of the fact that disasters offer one of the most dramatic stories to tell. Similarly, the literature from the area is so loaded with jargons that it rarely is understandable or appealing to those who should know about disasters: at risk citizens.

Dr. R.K. Bhandari is an icon in the field of housing, settlement planning and risk reduction with over five decades of contribution to India's growing urban and housing sectors.

The book is of use to both, students in school as well as to the citizens of India with interest in new ideas and insights emerging from Indian experience.

AIDMI had the opportunity to work with Dr. Bhandari when the High Powered Committee was set up by the Prime Minister Atal Bihari Vajpayee to review India's relief and rehabilitation administrations. Those who have worked with Dr. Bhandari know that he moves from one task to another with ease and clarity finishing each task effortlessly.

NBT is India's leading public domain publication effort to capture all that is best of India in the form of books for experts and citizens alike.

NBT needs to continue the disaster theme as a series of publications covering important individuals whose stories must be told as well as the disasters that are worth recording in stories for both general as well as educational purpose.

Dr. Bhandari tells the reader that traditional methods for testing new ideas, insights, products and process to reduce risk are becoming expensive, even when done as pilot studies, they consume time and resources. A highly agile approach that is based on flexible problem solving and innovation is needed in India.

Disaster Risk Reduction (DRR) needs to be solution focused and action oriented. How can India keep logic, imagination, institution, and systematic reasoning away from each other to explore our way ahead to a safer India? All must be merged into stories, powerful and compelling.

Indian disasters are a bit special.  Any flood or drought or cyclones get a bit tinted with Indian colours when told outside UN reports and government memorandum. P. Sainath, India's eminent journalist, in his book "Everybody Loves a Good Drought" has made this clear. Droughts in India gain their own life and persona. Dr. Bhandari gives us more evidence in this direction in his book. Once read and rested, the reader gets a clear view that disaster risk cannot be reduced by anyone acting alone-UN or government or NGOs or citizens-but only through coordinated action by all. Unless we as Indians unite across all categorisations, we cannot reduce disaster risk and build a resilient India.

Since 2005, the All India Disaster Mitigation Institute's (AIDMI's) regular publication called Southasiadisasters.net has been empowering at risk local communities and authorities by telling their stories of resilience. Documenting disasters and community voices around them has indeed proven that disasters in India do have a persona of their own and only through a united effort could India achieve resilience against these disasters.

Perhaps this is what India should focus on in its offer to South Asia to connect India's powerful National Knowledge Network (NKN) for sharing scientific database and remote access to advance research facilities.

NKN is a multi-gigabit pan-India network which facilitates the development of India's communications infrastructure, stimulates key research and creates next generation applications and knowledge services. NKN enables collaboration among researchers from different educational networks such as TEIN4, GARUDA, CERN and Internet2. NKN also enables sharing of scientific databases and remote access to advanced research facilities. Such stories can be a welcome addition to NKN in South Asia.

With its multi-gigabit capability, NKN aims to connect all universities, research institutions, libraries, laboratories, healthcare and agricultural institutions across the country to address paradigm shift. The leading mission oriented agencies in the fields of nuclear, space and defence research are also part of NKN. To strengthen research facility in various critical and emerging areas for NKN community, the network has established its international points of presence (PoP) in Geneva, Amsterdam and Singapore, and plans to soon establish a PoP in New York too. Let disaster stories populate the NKN for a joint web connect on DRR.