Is Air Pollution a Disaster in Indian Cities? 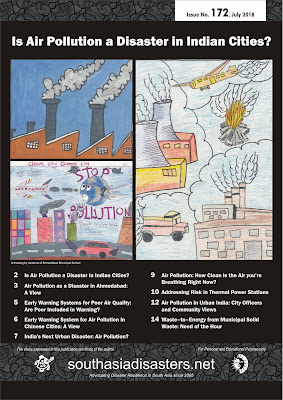 AIDMI's publication of Southasiadisasters.net is titled "Is Air Pollution a Disaster in Indian Cities?" and takes a close look at the problem of air pollution in India. It not only highlights the underlying causes of the problem of air pollution but also discusses the possible institutional and operational solutions to address this insidious risk. It is important to remember that poverty and pollution go hand in hand. This poses a great challenge for a developing country like India which has a large population. Two-thirds of India's population still lives outside of cities, and 80 percent of these households rely on biomass like wood and dung for cooking and heating. Agricultural practices like burning crop stubble also remain widespread. Couple this with weak enforcement of anti-pollution laws and regulations in India and a clearer picture of this crisis starts to emerge. This issue also highlights success stories in addressing air pollution from different countries for. Most importantly, it shows how the triple challenges of governance, technological innovation and behavioural change need to be overcome for addressing the problem of air pollution in India effectively.
This issue's contents includes: (i) Is Air Pollution a Disaster in Indian Cities?; (ii) Air Pollution as a Disaster in Ahmedabad: A View; (iii) Early Warning Systems for Poor Air Quality: Are Poor Included in Warning?; (iv) Early Warning System for Air Pollution in Chinese Cities: A View; (v) India's Next Urban Disaster: Air Pollution?; (vi) Air Pollution: How Clean is the Air you’re Breathing Right Now?; (vii) Addressing Risk in Thermal Power Stations; (viii) Air Pollution in Urban India: City Officers and Community Views; and (ix) Waste–to–Energy from Municipal Solid Waste: Need of the Hour.